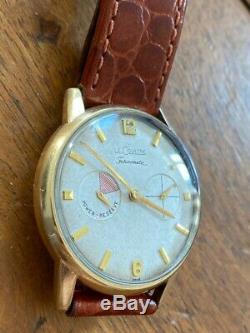 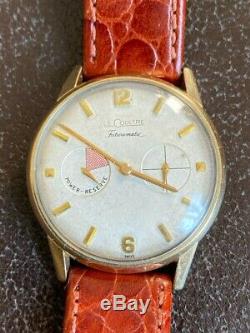 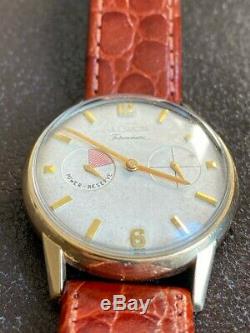 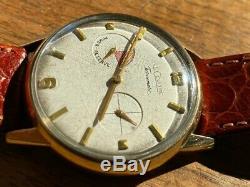 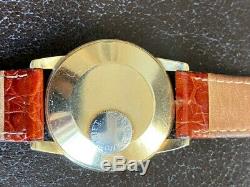 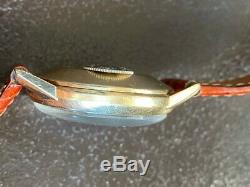 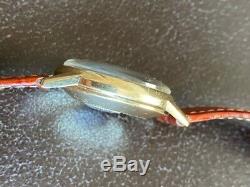 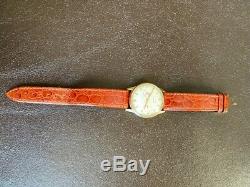 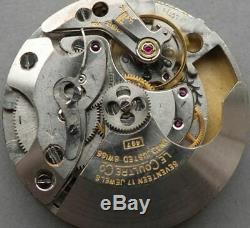 1953 Jaeger LeCoultre 10k Gold Filled Futurematic Automatic Bumper Watch. Caliber: 497, timekeeping functions great. The dial is in Good Condition with a nice dark patina. Power Reserve at the 9, and is working fine but doesnt reset completely to zero, resets to 1/4. Seconds Hand at the 3 - Beautiful bordeaux/Brown leather strap. A gentlemans'10 carat gold filled Futurematic wrist watch made by Jaeger LeCoultre, dating to 1953, in great original condition. The case and dial present very well and the movement is running strongly and keeping time.

The power reserve is functional but doesnt resets at zero. The movement also has a function which automatically stops the watch from winding when it is fully wound to reduce wear to the mechanism.

When the mechanism is nearly run down and is not being worn, it will hold a small power reserve so that when it is picked up it will run for a few hours without further winding. The Futurematic is one of the most collectable and innovative models manufactured by this famous company and probably second only to the Reverso in their vintage model range. Even today it looks futuristic and when I list one for sale, it always attracts considerable interest. The watch displays a chronograph style dial with two registers, a power reserve indicator and a seconds dial. The case houses an automatic bumper movement, especially designed for the Futurematic model.

Jaeger LeCoultre was so confident about the quality of this new movement that the company decided not to spoil the aesthetics of the watch by adding a crown. Instead it has a disc on the back cover which slides inwards to set the time. A watch with a bumper movement is always in demand from collectors. If you look at the photographs you can see that the rotor does not turn continuously through 360 degrees but bounces back and forth through around 300 degrees. Older Omegas had this type of movement.

These two companies manufactured more bumper watches than any other watchmaker. Dial: original factory finish in good condition. It is the rarely seen style with cross hatching to the power reserve register. Signed LeCoultre Futurematic Swiss, the dial has two registers, the power reserve indicator already mentioned, located at the 9 o'clock and the seconds register located at 3 o'clock. Gold coloured batons and Arabic numerals mark the hours and the gold coloured hands are in good shape with some discolouration evident on close inspection. The crystal is clean and clear. The dial is showing light even patina which will always be evident on a vintage watch dial but I hardly ever see a sixty one year old watch with an original factory finish dial in such amazing condition.

Case: in very good condition, measuring approximately 35 mm across and 42 mm from lug to lug. The inside of the case is hallmarked as 10 carat gold filled and signed LeCoultre. There are the expected signs of careful and probably use over the years but absolutely no signs of abuse, dents, scratches or brassing of any significance that I could see to highlight. 497 17 jewel automatic bumper movement, signed LeCoultre Co keeps time very well.

The bumper unit is an early automatic movement, first seen in watches in the late 1940's, with many Jaeger LeCoultre and Omega watches housing them up to the mid 1950's. Unlike the modern rotors which sit on top of the mechanism and rotate through 360 degrees, the bumper rotor rotates through a little over 300 degrees, hits a sprung stop which cushions the impact of the hammer action and helps sends the rotor to swing back to a stop on the other side of the movement. It should be "kick started" when first used by shaking the watch back and forth gently for few seconds. You will see the power reserve indicator moving out of the red as the watch winds.